Meds Not to Mix: Your Guide to Taking OTC (Over the Counter) Drugs Safely

Home » Blog » Meds Not to Mix: Your Guide to Taking OTC (Over the Counter) Drugs Safely 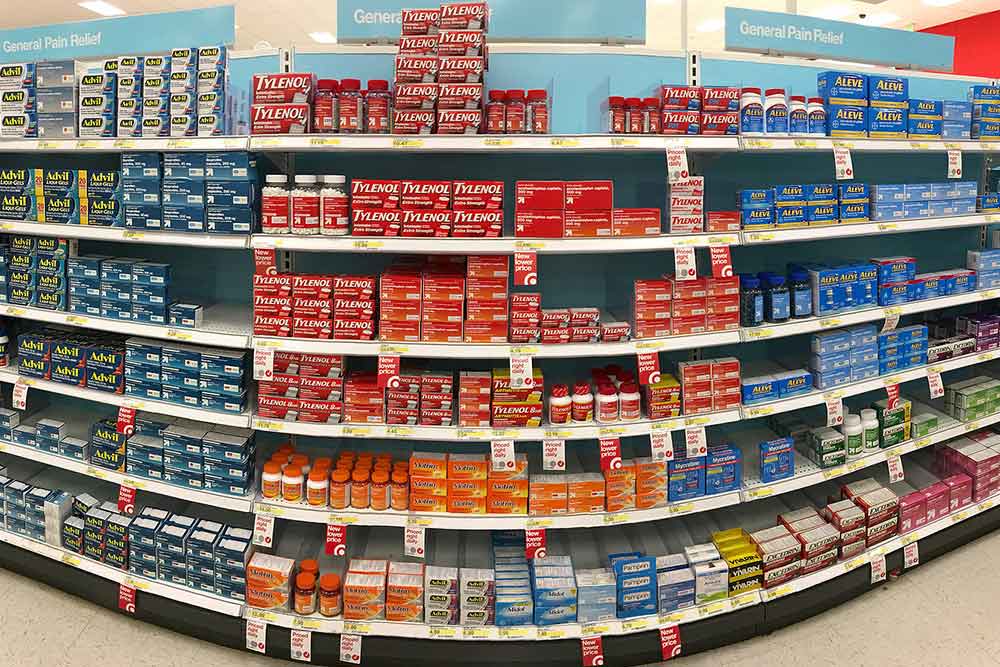 Many over-the-counter medications are available to consumers, but they must be aware of their potential interactions. This blog provides some tips on taking OTC drugs and safely avoiding harmful interactions. Always consult your pharmacist or doctor if you’re unsure how to take a particular medication. Stay safe and healthy!

With all the medication available on the market, knowing what is safe and what is not is tricky unless you are under a doctor’s guidance. Prescriptions and over-the-counter (OTC) medications have complex chemistries, and many drugs do not mix. A drug interaction could occur if you take the wrong combination of medications or mix certain foods and drinks with OTC meds. This interaction could prevent your medication from working correctly or make the side effects too severe. Here, we look at medicines you should not mix and possible harmful interactions.

Two common medicines that should not be mixed are warfarin and ibuprofen. While they are drugs used to treat different symptoms, they have some similar properties that can make their combination dangerous.

Warfarin is an anticoagulant, which means it helps to prevent blood clots. Ibuprofen, on the other hand, is an over-the-counter painkiller. It is classified as a nonsteroidal anti-inflammatory drug (NSAID). Although these drugs have different purposes, they both have blood-thinning properties.

If a person were to take these drugs together, their chances of a bleeding complication would significantly increase. It would become much easier for them to bleed and more difficult to stop the bleeding. Therefore, it is vital to be aware of the potential interaction between these two drugs before taking them together.

Acetaminophen is a pain reliever and fever reducer commonly found in over-the-counter cold and flu medications. People must be aware that acetaminophen can be toxic to the liver in high doses, so it’s important not to exceed the recommended dosage of 3,000 mg daily. When taking multiple medicines containing acetaminophen, check the labels carefully so you do not accidentally take too much. If you experience any symptoms of liver failure, such as nausea, vomiting, yellowing of the skin or eyes, or abdominal pain, seek medical help immediately.

According to a recent WHO (World Health Organization) study, depression affects approximately 280 million people worldwide. With this mental illness becoming so widespread, it’s not surprising more and more people are reaching for antidepressants. If you’re currently taking prescription medications for depression, you need to be aware that taking an NSAID at the same time can result in devastating consequences.

On their own, antidepressants and NSAIDs can cause esophagus and stomach bleeding when taken in excess. When consumed together, these drugs can increase your chances of gastrointestinal bleeding, which can vary from mild to life-threatening. Before taking any pain reliever while on antidepressants, ask your doctor for a list of medicines that do not mix to ensure you can safely manage your depression and any other painful conditions you may have. Safely managing your depression is essential to living a happy and healthy life. Don’t let the risk of dangerous drug interactions keep you from getting the treatment you need.

In addition to being aware of medicines that do not mix well, you need to understand that certain foods can have negative side effects when combined with prescriptions and OTC meds. One such drug-food interaction is grapefruit juice and antihistamines. A study conducted by the University of Western Ontario in Canada revealed that products and some citrus fruits, like oranges, contain chemicals that can affect various medications, oftentimes causing the medicine to stay in your body longer.

If you take Allegra with grapefruit juice, the liquid can decrease the amount that reaches the bloodstream, making it less — if not completely — ineffective. How grapefruit juice affects drug absorption depends on the type of medication it is mixed with. With Allegra, grapefruit juice prevents an enzyme from breaking down the antihistamine in your intestine, leading to a lower concentration of the drug in your blood.

To avoid harmful drug-food interactions, always read the labels on your medication and any food or drink you plan on consuming. Talk to your doctor or pharmacist for clarification if you’re unsure about anything.

Acetaminophen is a common ingredient in over-the-counter (OTC) and prescription medications. It is generally safe when used as directed. However, taking too much acetaminophen can lead to liver damage.

Drinking alcohol while taking acetaminophen can also increase the risk of liver damage. For this reason, it is best to limit alcoholic beverages while taking any medication that contains acetaminophen. “Acetaminophen overdose is the number one cause of acute liver failure in the United States,” says Sandra Adamson Fryhofer, MD, MACP. “The liver damage from this is irreversible.”

Milk and Ciprofloxacin or Levofloxacin

Many women treat urinary tract infections with ciprofloxacin or levofloxacin, but taking the drug with milk, yogurt, or even calcium-fortified orange juice could result in mistreating the infection completely.

Milk and other calcium-enriched liquids can bind infection-fighting Cipro in the digestive tract, preventing it from being absorbed into the bloodstream. “In terms of ‘dangerous’ drug-food interactions, most drug-food interactions reduce the absorption of drugs,” says Joseph S. Bertino Jr., Pharm.D and associate professor of pharmacology at Columbia University. Mixing these liquids can reduce the amount of drug absorbed into the blood so much that the antibiotic will not clear up the infection, and the bacteria can even become resistant to those antibiotics. It’s suggested that people wait a few hours between ingesting medicine, such as ciprofloxacin and levofloxacin, and consuming calcium-rich foods or drinks, such as milk.

Chocolate is typically safe when consumed with a majority of antidepressants. However, there is one classification that can potentially have a bad interaction. Dr. Michael Lowenstein, co-medical director of Waismann Method®, the pioneering treatment for opiate dependency, explains that monoamine oxidase inhibitors (MAOIs) should not interact with large amounts of tyramine, a naturally occurring amino acid found in various foods.

“Patients who are taking MAOIs should not consume foods with high levels of tyramine. Chocolate contains a small amount, but even so, patients taking MAOIs (such as Emsam) should be cautious,” Lowenstein advises.

Some common foods high in tyramine and that should be avoided by those taking MAOIs include aged cheeses, cured meats, fermented soy products, pickled vegetables, alcoholic beverages, and chocolate. So while most people can enjoy chocolate without any issues while taking antidepressants, those on MAOIs should steer clear to avoid any potential problems.

A seemingly safe food, large amounts of the flavorful herb can actually decrease potassium levels in the body, which in turn, can increase the side effects of taking a drug like digoxin (used to treat congestive heart failure and other abnormalities in the heart). “If you mix the two it can cause digoxin toxicity which can be life-threatening,” says Fryhofer. Licorice has also been known to reduce the effects of blood pressure drugs. Side effects typically include irregular heart rates, diarrhea, nausea, and double vision.

A study at the University of Utah evaluating the effect of St. John’s Wort on oral contraceptives found that the popular remedy is associated with breakthrough bleeding, follicle growth, and even ovulation. “People think that because it’s herbal, it’s safe, but that’s not true either,” says Fryhofer. This herb can reduce the effectiveness of medications in the blood, so women using OCs should be cautioned that St. John’s Wort might not be the best bet. If you take birth control pills while using St. John’s Wort, it’s suggested that you use another form of birth control as well, like condoms. Please discuss the best contraceptive plan with your doctor.

Xanax, a benzodiazepine intended to depress the central nervous system, shouldn’t be combined with other drugs that cause the same side effects. Along the same lines, people taking Xanax and other anti-anxiety medications should be careful when introducing caffeinated beverages.

“Caffeine can counteract the intended effects of anti-anxiety medication,” says Lowenstein. “Since drugs like Xanax and Ativan are used to reduce anxiety and have calming effects, mixing them with caffeine can cause an adverse interaction, like increased anxiety, insomnia, palpitations, agitation, and more.”

The amount you consume and your age and weight greatly affect interactions, but you should be careful and sip in moderation to play it safe.

It’s important to be aware of the dangers associated with taking multiple prescription and over-the-counter medications. By understanding the risks involved and consulting with your pharmacist or doctor, you can avoid dangerous drug combinations that could have serious consequences.

If you’re struggling with an opioid or alcohol use disorder, help is available at Waismann Method®. Our team offers a range of programs to ensure you receive the treatment you need for a successful recovery, including rapid opiate detox and medically-assisted alcohol detox. Contact us today to learn more about our personalized treatment plans — from fentanyl detox to Suboxone detox and more!

Always consult your pharmacist or doctor if you’re unsure how to take a particular medication. Stay safe and healthy!